OK. Edmund turned up at the studio about 4 weeks ago.
A small amount of Edmund's cremains were accepted and welcomed into England and our studio from Diane in the USA.
I felt highly honoured to have the poet laureate of Florida sit before me in a small parcel.
I had already spoken to Diane (the customer) and she had decided on the colour, size and basic design. The rest was left up to me.
Streaky green glass was chosen so I got the cutters out and off we went on a bit of a roller coaster ride.
Trying to get Edmund to behave in the glass was something of a trial. Putting any inclusion in fused glass can be a bit hit and miss but when ever I do a cremation piece it always goes a bit more a rye. And Edmund did not fall short on this, his rye sense of humour kept me on my toes but after the third attempt the initial stage of the pendant was finished.
Just to let readers know what sort of shenanigans Edmund was playing at. I had cabochons crack and break up and one had a bubble the size of a small party balloon.
Anyway, I could go on but the one thing you must remember when you read about the failed attempts is, I love doing this work, in fact it's not work at all.
Diane also wanted a twisted tree of life image fired in to the glass. The correct size image was chosen and placed on the Cabochon.
I was pretty happy with the pre fired look so the glass cabochon complete with Edmund and the twisted tree of life went back in to the kiln for his final firing.
and now for a couple of pictures: 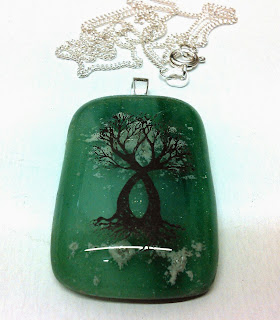 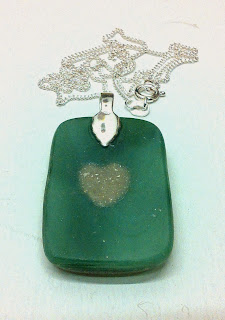 I also offer a heart design in the rear of the pendant of cremains. this also caused me no end of trouble (Edmund strikes again). But with a bit of jiggery pokery, the end design looked great.
That's about it really, apart from one more little detail to my service for Diane.
Whilst getting to know Edmund and for that matter Diane, it comes about that a lot of his formal training was Shakespearean and as my family only live about 12 miles away from Stratford on Avon. I offered to scatter his last remains near The Royal Shakespeare Theatre, Stratford on Avon. Diane was delighted with this idea so in the new year I will be taking a slight detour when travelling back home from my family.
I hope you have enjoyed reading this update about the Edmund Skellings Cremation Pendant. Having read about Edmund and watched him on you tube, I could go on about his character and his life time  achievements but far better writer and researchers have done that already. If you need to know more then just google his name.
Thanks again and

Thanks for looking at my blog. Hope you come back soon. :o)